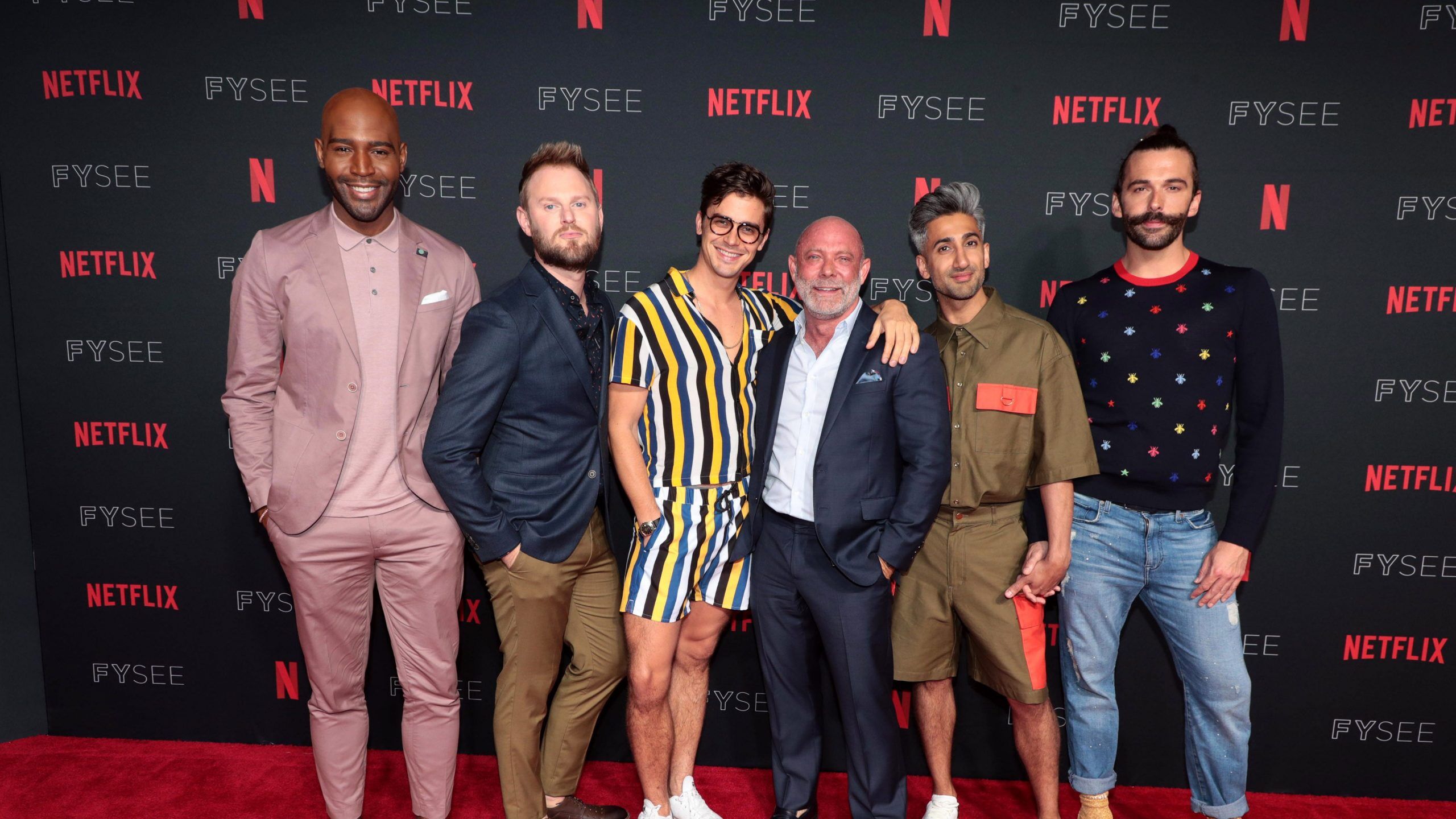 The hottest show on Netflix since 2018, Queer Eye, is both emotional and eye-opening for many viewers. With the show’s life-changing impact on cast members, many wonder how to nominate someone for Queer Eye.

In 2019, when the show started filming in Philly, people saw a Reddit casting flyer. The flyer was instructions on how to nominate someone for Queer Eye. To nominate, one will email the show at qecasting@itv.com and include all information about the nominee. To be exact, they will need to attach the nominee’s name, story and have some photographs in the email. And the last but most important step? Pray that someday, when you open the door, there stands the Fab Five.

Of course, that last step was a joke, but the initial steps are legit. Also, you can follow ITV Entertainment’s social channels and get notices when there’s a new call for talent. However, as Queer Eye is a highly successful show, they have people pro-actively casting and scouting. Regardless, it would be best to try all means to nominate someone worthy of a Queer Eye episode.

How Does The Show Get Such Huge Attention?

Queer Eye has won 8 times Emmy, with three successive wins for the Outstanding Structured Reality Program. Such achievements are not for nothing. Queer Eye is groundbreaking and insanely touching, with the “Fab-Five” offering hip tips besides fabulous makeovers and heartfelt reveals. In other words, Queer Eye is a must-watch.

With its first episode on Feb 7th, 2018, Queer Eye is a reboot of the Bravo series. This time with Queer Eye, the “Fab Five” features Antoni Porowski, Karamo Brown, Tan France, Jonathan Van Ness, and Bobby Berk. Each of them is talented in a particular field. Antoni is excellent at food and wine, while Tan knows everything about fashion, and Karamo is a culture expert. Besides, Bobby is an expert designer, and Jonathan knows all the fantastic tips about grooming.

What would you do if the Fab Five shows up on your doorstep? Image: vox

Queer Eye has won awards for its representation among the LGBT community and people of color across the seasons. Across the 47 episodes, Queer Eye has taken audiences on a grand adventure of feelings, from happy tears to broken hearts. As fans love the show too much, Queer Eye has just confirmed the sixth season.

Who Pays For The Stuff On Queer Eye?

IKEA could be the big brand behind all Queer Eye furniture makeovers. Image: latteandcloset

The Stories Of Lives on The Show

Across its seasons, Queer Eye tells different stories. In Season 1, a divorced 57-year-old man joined, thanks to his daughter’s nomination. With help from the Fab-Five to prepare for a date in the backyard and some tips for his appearance, Tom changes into a more confident version of himself, ready to carry forward the changes.

Afterward, Season 2 saw Neal – the loner – changing for the better. From an untidy household to a spot-clean house with new furniture, Neal’s home wholly changed. Even better, Neal also had his makeover to lead a more confident life and socialize more.

Queer Eye is not only a show but a life journey. Image: vox

An interesting case was Cory of Season 3, a 36-year-old former Marine and NASCAR fan. Though they started talking about enhancing his home and health, Cory and the Fab-Five eventually shared about the ongoing racial issues. That talk has seeded something for Cory about the need to build mutual trust between cops and colored civilians. It might change his outlook on life and what he can do for the community.

The show also went to Australia, filming its only Queer Eye Australia episode to date. The episode stars George, a hard-working farmer in Yass, Australia. The Fab-Five enjoyed themselves in the small town, had a blast before giving George the makeover of his life.

Overall, Queer Eye keeps on telling stories about lives. It is about people of different races, backgrounds, and careers. And it includes people with various issues or worries who all found some cures thanks to the advice and tips of the Fab Five.

Though every episode is unique in its way, there are eps that fans love more. These are the five popular episodes of Queer Eye so far:

“Without Further Ado” of Season 4 features someone who has an actual connection to a Fab-Five member. The episode follows Jonathan returning to his high school in Illinois to meet with Kathi Dooley. Kathi is a much-beloved band leader who dedicates her life to students. During that process, she forgets to take good care of herself. This episode is sweet and worthy culture-wise, thanks to Karamo’s discussion with the episode’s teenagers.

There is no shame in crying while watching Queer Eye. Image: techradar247

On a different note, “Sky’s the Limit” is both raw and groundbreaking. The episode shows the Fab Five together, watching the top surgery footage for Skyler – their trans hero. The most iconic moment is when Skyler takes the first glance at his chest and takes it all in. Skyler’s story of changing the gender on his license is very emotional. The episode’s happy ending is when Skyler gets a surprise visit by his idol Todrick Hall, right at his home.

Subsequently, Season 4’s “On Golden Kenny” is the most traditional Queer Eye scenario. Even after his parents passed away, Kenny is still a bachelor living with his sizable Croatian brood. The living conditions are terrible, and Kenny doesn’t want to leave his shell. With the help of the Fab Five, Kenny visits his local shelter, where he met a teary-eyed catharsis that he loves so much. Kenny adopts the catharsis and names his new companion after the Fab Five.

“On Golden Kenny” and the story of a man finding himself again. Image: Tunefind

The second most popular episode, “Black Girl Magic” of Season 3, is adorable. Jess, the first lesbian hero of the Fab Five, identifies herself as a “lumberjack lesbian”. Jess was kicked out of the adoptive home after she disclosed the truth about her sexual orientation. After dropping out of college, she works restlessly but refuses to build connections. The episode has everyone’s tears running as the Fab Five members help Jess get herself together. Jess’s episode on Queer Eye is by far the most emotional story the show has told.

However, “God Bless Gay” is ultimately the best episode of Queer Eye. It was a sustained tearful experience when the Fab Five met Mama Tammye. Tammye didn’t request help for her own but asked the Fab Five to redo the community center at her church. But the actual change was about Tammye’s son, who comes out to his Mom about him being gay.

In just one episode, the Fab Five witnesses extraordinary changes: one between a mother and her child and another about community support. The tearful episode ends with Tammye’s speech about a God that loves all people, regardless of who they are. It is both beautiful and teary.

Will Queer Eye Season 6 Be Coming Soon? – How To Nominate Someone For Queer Eye?

Queer Eye is hugely popular, and the fans are dying to see a new season. Even though the show’s crew has planned everything for Season 6, all filming activities are on hold to date. It is all due to COVID-19’s adverse effects on the world. Hence, fans might have to wait just a bit longer until it is safe to start filming. Until then, Queer Eye episodes are available on Netflix, and fans can binge-watch anytime! Looking for more great shows, visit our Entertainment section for more. There is so much more useful and free information you can find on JobandEdu.