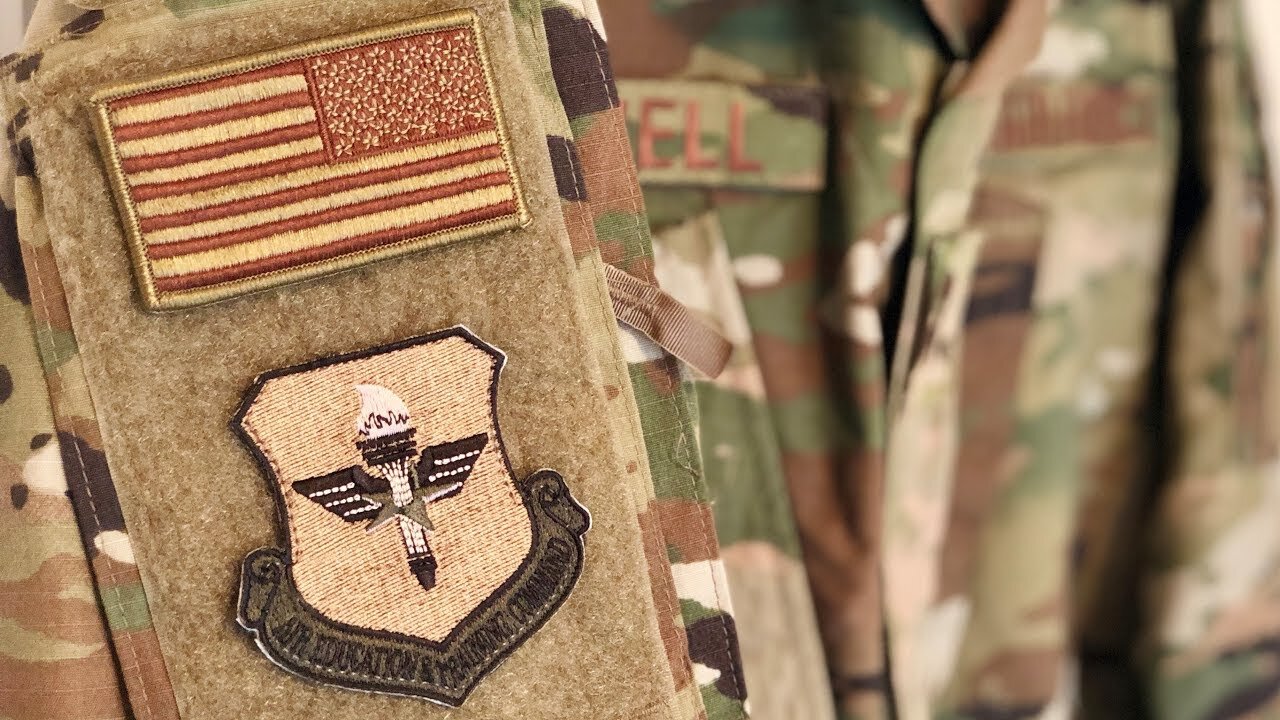 OCP (Operational Camouflage Pattern) is a military camouflage model adopted in 2015 for use as the United States Army Combat Uniform (ACU) primary camouflage model. The US Air Force (USAF) has published its own Air Force OCP Guidance, which requires those serving in the USAF to meet specific standards.

To demonstrate adequately as a USAF member, each person must adhere to a strict uniform, grooming, and appropriate civilian outfit.

When You Need to Wear Air Force (AF) Uniform

When traveling, each soldier must abide by the military and civilian organization’s uniform policies.

On an official flight, soldiers may wear other AF uniforms instead of the flight mission uniform. It should also be tidy, orderly, and professional if you want to wear civilian clothes on your official travel.

While traveling abroad, it is vital to consult the Department of Defense Foreign Clearance guide carefully.

When You Do Not Wear Air Force Uniform

Do not wear an Air Force uniform when engaging in public or secret demonstrations of a party overthrowing the government, opposing the armed forces, attending a meeting, or any occasions with Air Force intentions for sanctions.

While employing as a civilian, performing political events, or supporting any business or organization, do not wear AF, either.

What Include In The Air Force Uniforms? – Air Force OCP Guidance

The Airman battle uniform could alter both the desert camouflage uniform and battle dress uniform (BDU). Soldiers may wear airman battle uniforms for “short convenience stops and when eating at restaurants where people wear comparable civilian attire“, yet it is not acceptable to wear ABU in restaurants and bars (where individuals wear business attire). A fundamental ABU consists of:

Men and women could combine hats such as ABU patrol caps, organizer hats, or berets with an Airman Battle Uniform. Except in designated “no hat” areas, headgear is always one of the military uniform requirements for outdoor activities.

This is a long-sleeved button-down jacket. Its fabric, made of nylon and cotton blended in a 50/50 ratio, has a tiger pattern print. The soldier may not need to put the top button on if they don’t want to, but the rest must still be fully and adequately buttoned. In some cases, commanders can roll up their sleeves and wear a short or long-sleeved T-shirt inside the ABU jacket.

Women-only ABU jackets are also available. Women can take off their coats in the immediate work area. However, they have to put on their coats correctly when meeting clients or customers.

ABU pants are also made from 50/50 nylon and cotton, blended fabric with digital tiger stripes print. It should be buttoned carefully while on duty. When worn, the ABU trousers need tucking into the boots.

The service uniform includes light blue short-sleeved or long-sleeved shirts and slacks or trousers yet does not consist of jackets. Also, the tie tab and the tie can be optional.

Next, the aeronautical badges, name tags, and chevrons must accompany the service uniform. Optional regular or mini-size ribbons can also be added.

Mainly aviation badges are worn over multiple and occupational badges.

The service uniform often includes a blue jacket, skirt (for women), or blue trousers (for men). This kind of uniform also consists of a light blue long-sleeved or short-sleeved shirt. There is also a service uniform for pregnant women, including skirts and tops for pregnant female soldiers. Men have ties, and women have tie tabs and belts.

The United States lapel badge must include the chevrons, name tags, ribbons, and aeronautical badges. Cufflinks or other badges are optional.

The norm of grooming calls for clean, well-groomed, and tidy dresses for men and women. Here are the other laws that apply according to gender:

Many individuals assume that a male soldier has to shave his hair. Currently, this only takes place in a boot camp for military or basic barber training. Soldiers can get their hairstyles back after their first few months in the Air Force.

There are some rules of Companies Registry by the Air Force Manual (AFI) 36-2903 regarding personal grooming and appearance requirements (regarding haircutting):

Men’s hairstyles must have a slim profile on the sides and back. Best suited men’s hairstyle (when viewed from any angle) will outline the individual’s hairline to match the head’s shape. Hair is curled inward to the natural endpoint.

In case men experience baldness or disfigurement and need to wear a wig, they must have proof of medical documentation.

Men are not allowed to grow beards, except for health-related cases or special plights. Also, men’s mustaches can not extend beyond the upper lip contour. Men also need to trim sideburns evenly and adequately.

Women must let their hairstyle present a professional look. Like men, women cannot have deemed outdated, extreme, beyond the standard, or violate safety procedures.

Female soldiers need a neat bun, a straight ponytail or braids (long hair), or short, neatly trimmed hair. They can wear headbands, elastic bands, hairpins, or pins, but they must be similar to personal hair color.

In 2018, the Air Force updated its rules for maximum hair length for women to 3.5 inches. The update now also allows a hairstyle – called locs, which must be “lightly fused or interwoven to present a neat, professional appearance.”

Beyond that, bangs or other front hair depend on a woman’s preference.

Conservative nails and cosmetics polishes are allowed for women in the air force. Nails must be clean, groomed but not interfere with the devices’ safe operation.

Tattoos (Both Men And Women)

No one can carry offensive content or do ridiculous acts while working in the air force. Military images must always be severe and professional.

The tattoos should not be in areas such as the neck, face, scalp, lips, tongue, or hands (except wedding ring tattoos). But they could appear less than 25% on the back, chest, arms, and legs. Furthermore, once you join the Air Force, tattoos/brands that carry obscene content, support racial, sexual, religious, or ethnic discrimination anywhere on your body are prohibited.

Tattoos/brands that are detrimental to good order and discipline of the Air Force are also prohibited outside and inside AF uniforms.

In US Air Force dress code regulations, safety is the primary factor.

The blue name tags of the US Air Force would be 3-3/16 ‘x 5/8’ in scale and have beveled sides. Women and men often wear them on the short- and long- shirts of Service Dress Uniform (Class A) and Blue Service Uniform (Class B) as a requirement.

The Air Force Blues name tags wear regulations vary marginally between men and women. The name tag needs to be in the center yet not over the pocket’s edge fold on the men’s right side.

Women have to wear the name tag 1.5 inches higher (or lower) than the first exposed button to their left side.

You cannot wear glasses with any ornamentation when wearing an AF uniform. Sunglasses cannot have mirror lenses, either.

Contact lenses having natural-looking shapes and designs are acceptable. But they must not have color as resulting in natural-eye-color changes.

Bracelets and watches are allowed in AF. Yet, these types of jewelry must have a conservative design and be safe for the wearer and those around them.

The necklace can be worn but not exposing the outside of the shirt. What’s more, women can wear stud earrings. In contrast, men are only allowed to wear earrings in civilian clothing.

For portable electronic devices such as cell phones or any device worn on a purse or waistband, they must have a conservative and plain color (black, silver, dark blue, or gray). In the case of public duties, exercising, or during air travel, soldiers can wear headphones with Air Force uniforms if necessary.

Mobile phones cannot be used while wearing a walking uniform, except in emergencies or due to some official notices.

The AF has regulations to secure female soldiers’ belongings such as luggage boxes, backpacks, purses, bags, and ordinary exercise bags.

Soldiers can still wear religious costumes during religious ceremonies as long as they are “easy-to-see”, no-frills, and not flashy. The installation commander may approve plain, black, or dark blue metal headscarves for indoor wear or under an outdoor uniform/hood.

As a rule, the hat should be worn slightly to the right from the hat’s longitudinal fold and be in line with the center of the nose and forehead. The hat must be only about an inch above the eyebrow. If you do not wear a cap, keep it below your belt between the first and second belt loops, yet do not fold it over.

Black lace oxford shoes with a round toe and no perforations usually have a high gloss look. The heel and the sole are no more than an inch thick. Both men and women could take on a hose or short plain black socks.

Women can pair high heels with blue service uniforms. But high heels should be plain black, with no vignettes or decorations and high gloss definition. Furthermore, the shoe’s heel must not have a sole that is too thick and not taller than 2.5 inches.

When wearing thongs or trousers, battle boots are permitted in a military uniform or an official blue uniform, but not for skirts.

By and large, the US military in general and the US Air Force have their own sets of uniforms and appearance to maintain soldiers’ discipline.

American soldiers’ pride and self-discipline demonstrated through their conservative military image are essential components of the Army’s military strength and effectiveness. Prior to joining the US Air Force, this Air Force OCP Guidance will undoubtedly help all soldiers to prepare better.

Can You Join The Military With A Ged?

How Does Jury Duty Work in the US?

Top 7 Weekend Only Jobs Near Me

Modern Rules For How To Be More Humble